In recent years, there are numerous insults, attacks on Ataturk in Turkey and surprisingly outside. People have no knowledge of Turkish history, very limited knowledge of Islamic religion, they haven’t read Ataturk’s book NUTUK, but they spread unfounded false accusations like a disease. My question is WHY? Why a man who died in 1938 bothers these people so much? 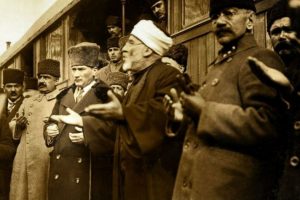 A friend of mine Yilmaz Karahan summed up the distortion of Ataturk’s true value and personality in three types.

One needs to pay attention that first 2 feeds the third one. Hence all in all, since 1938, this has been used to dismantle, destabilise Turkey till this date. They created an unreal Ataturk (using national hero, a true humanist genius and Turkish value) with 3 heads. With all this influence, most of the Turkish people, let alone foreigners don’t really know real Ataturk.

Some realities of Ataturk:

Simply saying, all world Muslims should follow Hz. Muhammed and his way, take him an example, should behave like him and all Islamic rules should be applied as it is. Only this way humans can be saved and prosper.

What Ataturk did was to get rid of religious scum bags who hid in so-called Tarikats (also called Zaviye, Tekke etc.) worked as agents for foreign powers to help collapse of Ottoman Empire. Even after war, they were still using religion for the uprising.

This is despite killing hundreds of thousands of innocent Turkish people, slaving people (despite it’s forbidden in Islam) during Abbasi and Emevi (Ummayad Caliphate) terms by so-called (distorted) Muslim Arabs. How about today? What do they do today? A few puppets of western powers sucking the blood of innocent people. The truth is out there, one just need to read, research and don’t believe everything said by distorted, manipulated and used so-called Sufi groups.

These groups also say Turks don’t like Sufis!! In today’s Turkey, there are hundreds of Sufi groups. In fact, there is no need to have so-called SUFI groups. All Muslims in Turkey (98% of the population) live it without the unislamic and cultish behaviour of these groups.

Sufi tradition doesn’t come with Islam, it is a Tevrat (Judaist) tradition and existed well before Islamic religion.

Everybody who knows Turkey knows some of the well organised large groups of which has mosques in many other countries. They have been used and manipulated by external powers. The best example is Gulen movement (the most dangerous terrorist group who infiltrated in every government and civil organisation using religion in disguise, used by very obvious western powers as a test bed, attempted to take over the country in 2016, bombing parliament, killing hundreds of innocent people).

Another very famous so-called Sufi is RUMI, called MEVLANA in Turkey. His cult is also called MEVLEVI (MEV – LEVI: Comes from LEVITES). Nobody questions him and his origins. Not anymore. Several Turkish researchers are actually looking into it and uncovering his hidden agenda and how he actually implanted kabbalistic rituals in Islamic teaching and distorted the religion. You can read more about crypto-Judaism here https://panjewish.org/denominations/alevi-bektashi/ .

Rumi had a very interesting relationship (a love story) with Sems. They try to put it a Godly love but reality shows different.

So in this short article, I tried to explain that there is more to the truth then it looks. None of the Islamic cults has anything to do with real Islam. They did not exist during the prophet.