I met John (Mu’adh) and his wife Mo (Iman) during a recent visit to Ireland when we were thrilled to be guest in their home.  Some mutual friends from the Norwich Muslim community had introduced them to us, so we called them before our arrival in Ireland and they both insisted that we should visit and stay with them – at least for a night or so.

I have to be honest and say that I previously had no idea about John’s style of painting and art but I was curious to learn. When we arrived at the house, John was sitting on his sofa and working on his sketch book of paintings.  Yes – a book of paintings being worked on simultaneously, in which he was creating a different painting on every page.  Some were half done, some completed and some were just starting to take shape.

As soon as I asked about his work, he explained how he works and about the collage painting technique which he uses.  I found it fascinating.  He explained that since childhood, he had seen everything differently from all other people.  He explained that he sees the world as a garden from which he can pick and choose images, objects, colours, ideas – and that he perceives a harmony in the things around him from a totally unique angle and perspective from most other people.  That is why he starts a painting with what he finds at that moment and then keeps it, unfinished, to add to later on.  When he finds other elements which harmonise with that particular work of art, he then adds those other elements later.   What surprised me, was that he does this with hundreds of paintings simultaneously and remembers which piece should be used in which unfinished painting.

During my visit our conversation touched upon metaphysics, religion, art, life and many other subjects.   John has a great sense of humour and makes fascinating observations about things from many different perspectives.

Recently, John and Mo moved from their remote home on the Beara peninsula to a lovely town house in Skibbereen (Irish: An Sciobairín) – both in the West of County Cork, Ireland. At the back of his new house John has created a purpose-built studio from where creates his masterpieces.

As you can see from the pictures, hundreds of paintings are worked on simultaneously. Within a short time, I could relate to his paintings and understand how he perceives the patterns, colours and harmony in the nature and his environment that I can’t see.   Maybe I don’t look at things and nature in the way he does. It is a gift and passion which John was born with. He says, “all my life I liked to paint and that is what I did”.

The book titled “The Whole Planet is a Garden, The Genius of John Kingerlee” is written by Edmund P. Pillsbury, PH. D. with contributing essays.

This valuable book was first published in 2010 and includes John’s works and travel in the years between 1990 – 2010. A brief understanding of John’s Art can be gained from this extract from the introduction written by Brian Lynch:.

“..in the polite social sense of introducing a stranger to new company, is about as useful as telling a The Whole Planet is a Garden house holder that what blown the roof off her house is called a hurricane – nothing much has been added to the experience by the naming of it.  Kingerlee is a force of nature and what he does is, like a storm, instantly recognizable. So, the sensible thing to do in introducing him is simply to say, ‘Here he is, hold on to your hat’, and stand aside.” Brian Lynch

Interested readers can find out more information about John and his art from his website: www.johnkingerlee.com .  I have a signed copy of John’s book which I most enjoy showing to friends and family.   People of all ages enjoy John’s art – my teenage daughter was fascinated by the pictures in it and literally looked at it cover to cover. 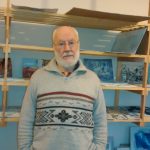 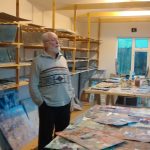 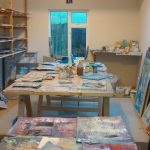 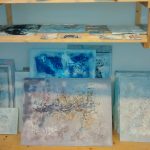 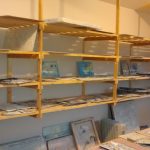 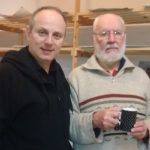