Cyprus has been ruled and visited by many people throughout history including the Persians, Romans, Venetians, Lusignans, Ancient Greeks, Ottomans and more recently the British – who leased Cyprus from the Ottoman Turks in the 1870s until Cyprus gained its independence in 1960. Each of these civilizations has in turn left behind unique traces on the island and, if one digs deep enough, hidden jewels of history can be found.

During my recent visit to Cyprus I travelled widely – mainly in the Turkish Republic Of  North Cyprus – but prior to my departure also in the Larnaca area of South Cyprus.  As a Muslim I have an interest in mosques and Islamic shrines – and I discovered that one of the most important Islamic shrines in the world is actually situated very close to Larnaca Airport, right on the salt lake which is visible to everyone who arrives or leaves the island from Larnaca.  Known as the Hala Sultan Tekke Mosque, it is said to be the fourth most important Muslim shrine in the world.

Hala Sultan (Umm Haram bint Milhan) was sister to the foster aunt of the Prophet Mohammad (salla llâhu ‘alayhi wa sallam).  Her sister Halima Sa`âdiyya was the wet nurse to the Prophet.  During my visit to Cyprus, I learned the amazing story of how she had come to visit and die in this beautiful island – and how her grave has now become a shrine bringing peace to countless people – Muslim and non-Muslim alike.

Hala Sultan was an exemplary and unusual woman.  During his life, the holy prophet Muhammad (s.a.w.) was extremely fond of her family and often visited their house and ate with them.

After his farewell pilgrimage, and close to the time of his death, the Prophet (s.a.w.) visited her and after his meal, fell asleep.  As Hala Sultan was combing his hair with her fingers, he awoke smiling and told her that he had been dreaming that his Ummah (the Muslim followers) were on a sea voyage to spread the word of Allah. She asked him if he could pray for her to be with them. He prayed and then slept again. When he woke up again, told her that he had been having the same dream and saw that this time she was with them.

Years later, and after the Prophet’s death (s.a.w.) and during 3rd Caliph Hz. Osman (644-656), the first Islamic navy was established in Syria. Their first destination was Cyprus due to its strategic importance for Syria, Turkey and Egypt. Hala Sultan with her husband Ubade b. Samit(Ubud bin el-Şamide/Üladet ibni Sabit)) joined the first campaign as volunteers (649). Due to their old age, the fleet commander initially did not want to take them but when she  related the Prophet Muhammad (s.a.w.)’s dream he had to take them on board.  In fact, after arrival in Cyprus and in the midst of extreme bravery –  she fell from her horse, instantly broke her neck and died –  hence she was one of the first Islamic martyrs on the island.  In addition, despite her age, she had actually worked as a nurse during this campaign and can also be considered one of the first  nurses in the world.

As you will learn in the video here, the legend of Hala Sultan includes a story that she once went to Palestine to learn the repetition of the Quran. As she was walking by a Jewish person’s door she  saw 3 huge stones. She asked if he would sell the stones – and paid for them. The seller enquired when she would take them and her answer was “when they are needed”.

According to the legend, when she was martyred and then buried, these stones appeared on her grave to protect her. Two of them were vertical and one was horizontal – seen miraculously floating above the others – without anything to support it. The current Turkish Imam of the mosque in the video below relates that until recently the visitors, including his own great grandmother, actually saw the floating stone, however later on the story goes that the gap  underneath was filled in by colonial rulers!

There is also a story about the discovery of the grave. During Ottoman rule, some of the dervishes (Sufi) were staying close to the grave (at that time totally unmarked) and started having dreams of Hala Sultan telling them where her grave was.  These dreams went on for some time and were experienced by many people.  As a result, they found the grave and , then investigated to whom it could belong.   When the investigation was complete, it was certified that it actually belonged to Hala Sultan and as a result, the beautiful Mosque and Tekke was built around it as today.

During my visit (see the pictures below) I had a real spiritual experience.  As I entered the shrine door, I felt as though I was surrounded by an inexplicable and quite incredibly powerful and peaceful atmosphere. I sat in the corner of shrine and prayed for a while.

Being located in the (Christian) South of the island, the Imam is not present every day and when asked, the Cypriot caretaker had no idea of praying times or any useful information – leading me to feel a little sad that this holy shrine is not maintained by Muslims and does not have a full time Imam.

However, help was at hand!  As I was waiting to do my mid day prayer (Salatü’z Zuhr) in this holy place, I saw a few middle eastern people beginning to gather in the mosque.  They were local Syrians, working in Cyprus. I introduced myself and quickly we formed a small group – of male adults and children – and when the prayer time came, we prayed together.

One of the beauties of Islam is that billions of Muslims all over the world can understand each other and pray together. No matter what nationality, race or country they come from or language they speak – we are united in our Faith. 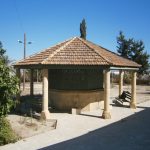 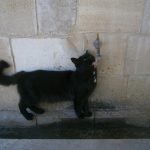 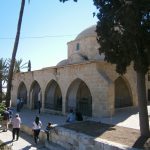 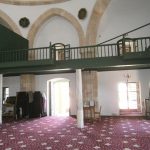 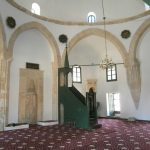 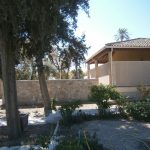 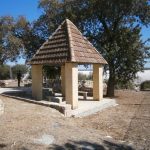 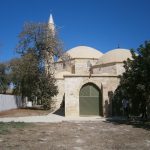 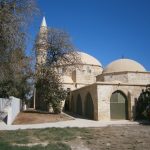 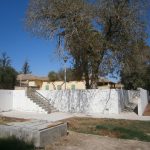 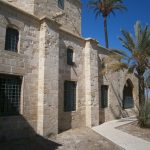 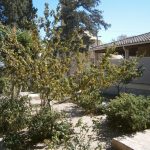 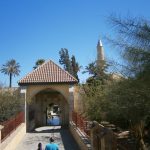