Sayokan European Seminar took place 2-6 May in Utrecht, Holland. In a way I was expected to join, being SWF Director of International Affairs. I also needed to escape from daily life and do something I enjoy for a few days.

It was also an opportunity for me and to refresh, increase my knowledge, catch up with Yabgu Nihat Yigit (the founder of Sayokan). We always communicate and talk by phone but not the same when we sit face to face. His teaching is always detailed and precise. I like to attend his classes and just be a student.

Sayokan is now established well and our technical structure as well as theoretic teachings are very rich.  We have done a lot of improvements and opened the wraps of some parts which were not revealed yet.

It was truly a cultural event. A chef (teacher) with his wife cooked south eastern Turkish food with extra deserts in the evenings and other snacks in between the meals. It was all delicious. They were so kind, caring and accommodating. I thank them on behalf of Sayokan family.

In the evenings and during the days, we had many visitors from Turkish community which is a tightly connected and supportive, from Utrecht and nearby towns. They were also very kind to us. 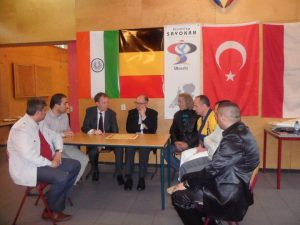 We had to adjust seminar curriculum according to the levels of participants. Some essential basics as well as advanced techniques were practiced.

Local press and council officials  (including mayor) also visited the camp place. They were pleased about  our self defense system for all ages as well as Sayokan’s mentality of respect for all and none religious approach where every person could apply his/her own faith in spiritual development side if chosen. They shared Turkish tea and some Turkish food with us. It was a warm welcome and we thank them for visiting and welcoming us.

The last day was sentimental. In all Sayokan seminars and camps, we talk, joke, train and catch up with each other, form new friendships and say good bye hoping to meet in another Sayokan event. It was a very good seminar well organized and done. Thanks to Sayokan Holland team.